China is too big and important to be seen as simply part of Asia - it’s a region in itself. Both the market and the profile of its leaders are changing rapidly.

Do you have the right organizational structure for your business in Asia? If China is a big enough part of your revenue, or you want it to be big enough, then shouldn’t it be treated as a region in itself? To that end, shouldn’t your China leader be part of your global executive leadership team, and your China operations be a unique business unit?

Most multi-national corporations (MNC’s) have traditionally set out their strategic, commercial and operational objectives on a region-by-region basis, with Heads of APAC reporting into global. This is now changing as companies realize the current and near-term consumer and purchasing potential of China and align their organization to capture a share of the world’s largest marketplace, unencumbered by other Asian markets.

Massive but not Homogenous Market

China has the world’s biggest middle-class (400 million people in 2018) which will grow to 1.2 billion by 2027. This will be a quarter of the entire planet’s middle class in one country…in six years from now. It has more wealthy people (defined by those with a net personal wealth of at least US$100,000) than the US (100 million vs 99 million). And even though China does not have the highest number of millionaires in the world (the US has slightly more), it has more billionaires than the US and India combined (658).

The sheer size and scale are compelling, but China is far from a simple or homogenous market. As a mixed socialist market economy with strong regional dynamics, the country is undergoing rapid and fundamental changes in consumer behavior, e-commerce and the rise of Chinese competitors focused 100% on their native market. This makes for a fiercely competitive commercial environment, particularly when in some cases, these domestic companies have been active in acquiring Western firms (for example, China’s Anta Sports bought Finland’s Amer Sports - owner of Arc’teryx Salomon, Atomic and Suunto). This focus and opportunity mean that top talent is attracted to companies that make China a strategic priority for all aspects of their business. 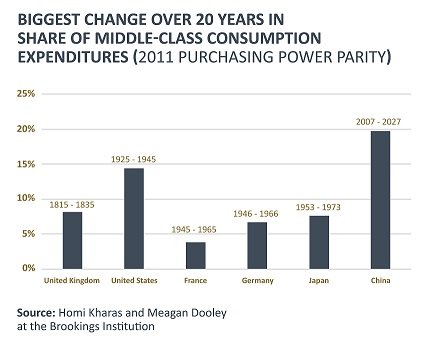 These changes are having profound effects on the profile of leaders in China. They are younger, more diverse and more e-commerce savvy than their old economy global leaders and the previous generation of China leaders were. Unlike Japan or Korea, this is a highly competitive meritocracy, and many of the most iconic new economy leaders achieved notable success in their 30’s. Such changes are not limited to commercial organizations across the country - they have also been taking place in political and administrative leadership circles throughout Chinese society.

NGS Global’s team in China have undertaken several mapping exercises for clients and partners, assessing the talent acquisition landscape in the country. There is intense competition for executive pedigree from Chinese brand owners and innovators such as Jiangxiaobai and DJI, and e-commerce and tech companies (see RED Group, Baidu, Alibaba Group, Tencent, Kuaishou, JD.com) as well as smaller start-ups. There is also a large amount of private equity and investor backed ventures that are attracting top talent to portfolio companies with the offer of equity and sharing in the value creation.

In their book China CEO II, Dr Laurie Underwood and Professor Juan Antonio Fernandez interview 25 China CEO’s of leading MNC’s, and compare the landscape of CEO’s in the country today with 15 years ago (when they wrote their first China CEO book). 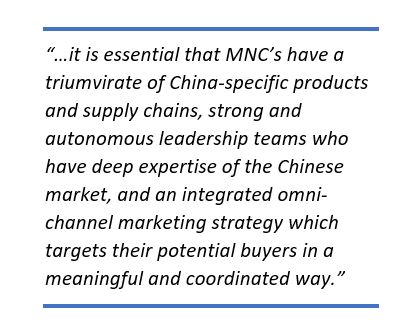 What’s Next for MNC’s?

Interestingly, we have found that this generation of China business leaders do not expect to move into an APAC role or out of China, but desire to stay within the country and run increasingly large complex China operations. They fundamentally believe the size and scale of the opportunity in China outweighs other markets. They are more likely to see their careers moving into private equity backed C-suite like McDonalds China, owned by CITIC Capital and Carlyle, or working for China enterprise global leadership roles like NASDAQ listed YUM China.

The challenge for MNC’s is how to reflect the change in the markets balance of power and create regional and global leadership positions that are based in China. Companies can then benefit from the innovation and technology developed in China, to harness talent at the senior leadership level, that is in their priority market and compete meaningfully to retain top talent.

In order to succeed in China, it is essential that MNC’s have a triumvirate of China-specific products and supply chains, strong and autonomous leadership teams who have deep expertise of the Chinese market, and an integrated omni-channel marketing strategy which targets their potential buyers in a meaningful and coordinated way. Top talent in China is attracted to roles that allow them to focus fully on growing the business, in what is an increasingly sophisticated, competitive and very fast changing landscape.

Julian Buckeridge and NGS Global’s team in China, with offices in Beijing, Shanghai and Hong Kong, can assist your organization with executive search, talent mapping and executive leadership consulting.